Get to Know Your Guides 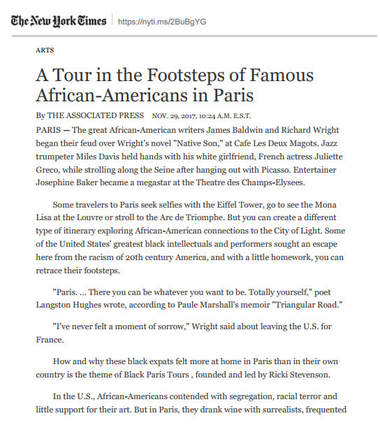 Black Paris Tours was the focus of a December 2017 Associated Press article that was published in the NYTimes, LATimes, Chicago Tribune, and hundreds of other major daily newspapers in the US. Earlier in the year, Black Paris Tours received the “2017 Outstanding Tour Award” from the African Diaspora World Tourism Board, received Trip Advisor’s 2017 “Award for Excellence" (the fifth year in a row) and was featured in the May 2015 vacation issue of Essence Magazine. Questlove of the famed musical group "The Roots" posted video to his 2 millions followers praising Black Paris Tours after taking the tour in July, 2016! Black Paris Tours also earned the Steve Harvey and Roland Martin "stamp of approval" after separate television/radio interviews with them in 2013. Black Paris Tours is now ranked among the top “Must See” things to do and experience in Paris.Newspaper articles about Black Paris Tours have appeared in the Wall Street Journal, New York Times, LA Times, Oakland Tribune, Washington Post, St Louis Post-Dispatch and others, as well as in Ebony, Jet, AMINA, Time Out London, WHERE, Emerge, Stanford, CNN Travel and American Express’ Travel and Leisure magazines. Black Paris Tours is profiled in Fodor’s, Rick Steve’s, Lonely Planet, Frommer’s, Access and a number of other guidebooks and blogs dedicated to exploring Paris...including the French Government’s Tourism Guide.